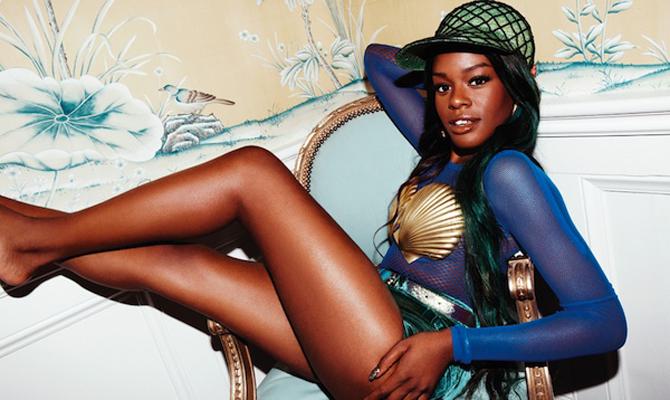 “If you guys look closely enough you can see the future,” Banks says in a conserved tweet.
Azaelia Banks has been accused of tweeting her genitals to conservative blogger Matt Walsh.

“If you guys look closely enough you can see the future,” Azaelia Banks allegedly says in a deleted tweet published by conservative political blog TheBlaze.

“I write a post to @AZEALIABANKS,” Matt Walsh writes via Twitter. “She responds by tweeting me a photo of her vagina. Sexual harassment? Or is that just when guys do it?”

The conservative political blogger wrote a blog about the Harlem artist in response to Banks’s Playboy spread.

“I read about your interview with Playboy magazine where you
apparently took off your clothes and talked about how much you hate
white people,” Matt Walsh writes via TheBlaze.
“Just another day at the office for you, I suppose. I confess I didn’t
read the whole exchange, though I’m sure it was packed with penetrating
insight and searing self-reflection.”

Walsh pointed to a section in the recent interview which he says is hateful.

“I hate everything about this country,” Banks says in the Playboy spread: “Azaelia Banks: Wild And Uncensored For Playboy”
which was published last week (March 16). “Like, I hate fat white
Americans…All the people who are crunched into the middle of America,
the real fat and meat of America, are these racist conservative white
people who live on their farms… Those little teenage girls who work at
Kmart and have a racist grandma — that’s really America.”

Chinese Restaurant In Kenya That Discriminates Against Blacks Shut Down

Wed Mar 25 , 2015
A Chinese restaurant in the Kenyan capital Nairobi has been shut down and its owners summoned by authorities after it emerged it was barring black patrons, reports said Wednesday. The restaurant became the focus of city authorities after furious residents took to social media to denounce an apparently racist policy […]